This article is related to our monthly theme, goblins. This is also the first post with the “Myth Origins” tag, which basically means that we intend to do more content like this in the future. Also, these type of articles aren’t static, once we will continue to update them as we get more info. You can help us out with that by commenting here or sending us an email with “Myth Origins – Trasgo” in the subject.

Goblins have been described in many ways during the middle-ages. The later adaptation to fantasy literature also introduced new variants to the human imaginary. So much that sometimes they are often perceived as imps or gnomes.

Depending on the region of Europe, new representations of goblins would appear, some being more prominent in literature and others in folklore. The Portuguese Trasgos were present in the north of the country, specially in Trás-os-Montes and Douro. They were close relatives of the Galician Trasnos, Asturians and Cantabrian Trasgus, Castellian Duendes and the Catalan Follets and Donyets.

Their story, based on Celtic mythology, was probably brought to the Iberia Peninsula by the romans. Portugal would also be home to other two sub tribes of Goblins: the Zanganitos and the Diabinho da Mão Furada. The word Zanganito resembles “angry” in portuguese, which is a reference to the goblins temperament. This tribe lore belongs to the south of the country. The Diabinho da Mão Furada, meaning Little Devil with Pierced Hand, was portraited as a bit more friendly than the Zanganitos and Trasgos, and its lore suffered more from the demonization of pagan folklore by the catholic church. Tardo is also a Portuguese mythological and zoomorphic creature which is a lot times associated with Trasgos due to its mischievousness and similar stature.

Also probably influenced by religion, trasgos are said to be lost souls of non-baptized children, that came back to prank humans. In Vimioso there is a legend around the ruins of what is now called the “Trasgos’ Windmill”. As the story goes, one night, the miller came across a  trasgo using his fire to cook some lizards in a skewer. Additional shock happened when the man sees the trasgo trying to make the fat drip on his bread. 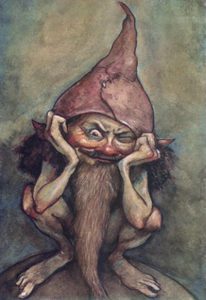 Constantino Cabal says that the trasgo is small and wears red clothes and hat. Having holes in their hands or tails are later deformations implemented by Christianity. Others also add long legs, dark skin, pointy ears and sharp teeth as physical characteristics. All references portrait these creatures as humanoids.

Trasgos choose a family and become overly attached. They are apparently inoffensive to humans but highly tricksy. While in a bad mood, trasgos will break your dishware and throw stones through the windows. These creatures with supernatural powers prefer acting during the night. They have a tendency to target women while they sleep, provoking nightmares. This particularity also reinforces their connection with the previously mentioned Tardos.

Not all families with a trasgo at home would know they were living with the little creature. Such thing would justify odd noises with no explanation during the night. The families who would meet their trasgo would probably want to get rid off it. Not just because of the evasion and occasional bad mood, but also because it feels too much at home. Other tales show a story of relatively cooperation. Trasgos had confidence in their skills and never reject a challenge.

And that is how you would get rid off one. Tell it to count sugar grains, bring all the water of the sea or any super difficult or impossible task. Ashamed for not fulfilling it they would leave the family.

Basically, trasgos are domestic goblins. If you read or watched Harry Potter you probably though about Dobby, the house elf, while reading this. Trasgos’ context is closely connected with the other goblin-like tribes in Portugal and north of Spain. The Portuguese Trasgo will influence the Brazilian Saci.

For more info about the lore you can always check the work of Paulo César Ribeiro Filho or Constantino Cabal, from which we got some of the info in this article. The first is in Portuguese, the second in Spanish.

Let us know if you have more info about this topic. Besides commenting or sending us an email, you can reach us through our social media and discussion groups:

Patrícia Priori - October 17, 2020
Are you familiar with the saying "Those who can, do; those who can't, teach"? Well, that's not a real thing at Hogwarts School of Witchcraft...

Hobbit and Mr Glass in the final!

The Office and Harry Potter: the crossover you didn’t know you...